The Legacy of Forced Sterilizations

In the 1970s, Jean Whitehorse, a member of the Navajo Nation, went to a hospital in New Mexico for acute appendicitis. Years later, she found out the procedure performed was not just an appendectomy – she had been sterilized via tubal ligation.[1] Around the same time, a Northern Cheyenne woman was told by a doctor that a hysterectomy would cure her headaches. After the procedure, her headaches persisted. Later, she found out a brain tumor was causing her pain, not a uterine problem.[2] Like Whitehorse and the Northern Cheyenne woman, thousands of Native American women have suffered irreversible changes to their bodies and psychological trauma that continues to this day. Most medical providers are unaware of our own profession’s role in implementing these racists policies that have direct links to the Eugenics movement.

Eugenics was a “movement that is aimed at improving the genetic composition of the human race” through breeding.[3] From its origin in 1883, eugenics became the driving rationale behind using sterilization as a tool to breed out unwanted members of society in the United States. With the 1927 Supreme Court case Buck v. Bell permitting eugenic sterilization, 32 states followed suit and passed eugenic-sterilization laws. Although the outward use of sterilization declined after World War II because of its association with Nazi practices, sterilization rates in poor communities of color remained high throughout the United States. 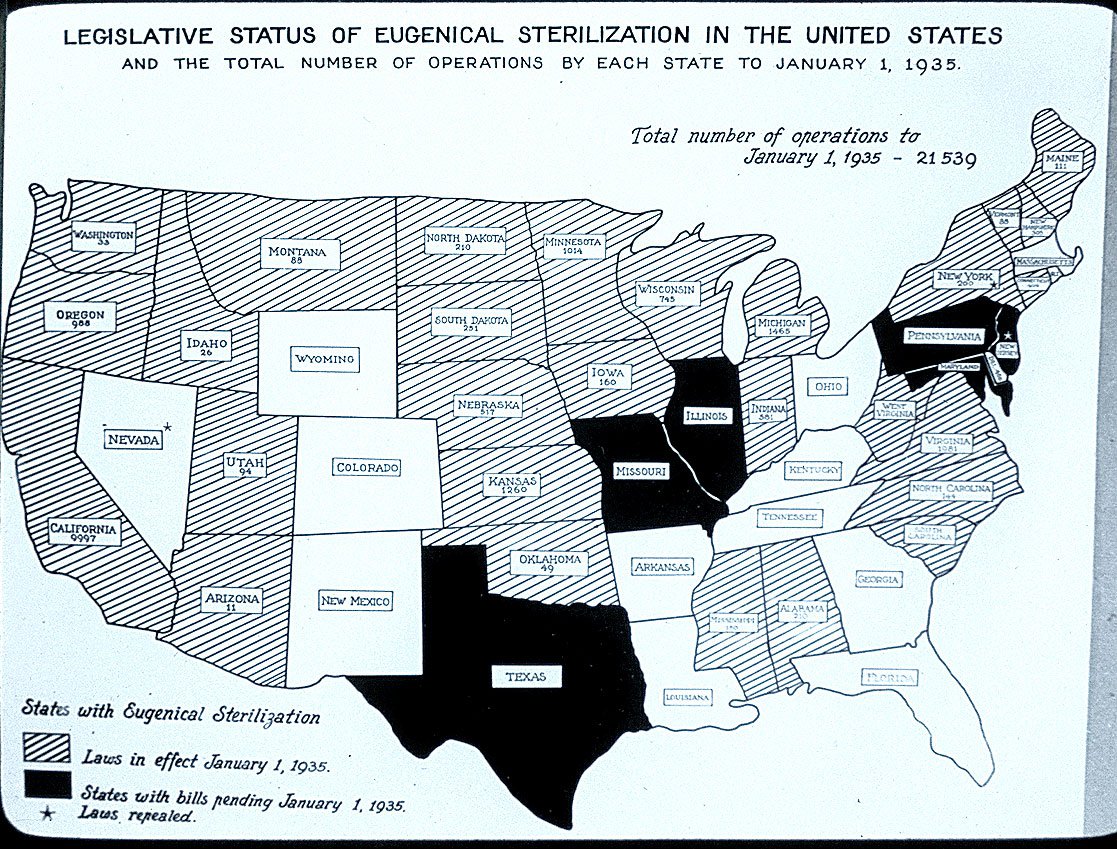 The 1970s marked a period when Native American women were explicitly targeted by forced and coercive sterilization practices. Native women, as young as 15, were threatened, lied to, and manipulated into receiving these procedures. This continued the United States’ legacy of tribal assimilation and extermination. It is estimated that between 1970 and 1976, 25 to 50 percent of Native American women were sterilized.

In 1975, Senator James Abourezk of South Dakota asked the General Accountability Office (GAO) to conduct a study on Indian Health Service (IHS) facilities in response to increasing reports of women being sterilized without proper consent. The report found that from 1973 to 1976, 3,406 Native American women were sterilized. Of these women, 3,001 were of child-bearing age (15-44). Additionally, hospitals did not meet the IHS requirements for giving their patients[5] informed consent.

From the GAO report, Senator Abourezk stipulated that the number of Native American women sterilized at these four hospitals from 1973 to 1976 was comparable to 452,000 non-Native sterilizations. 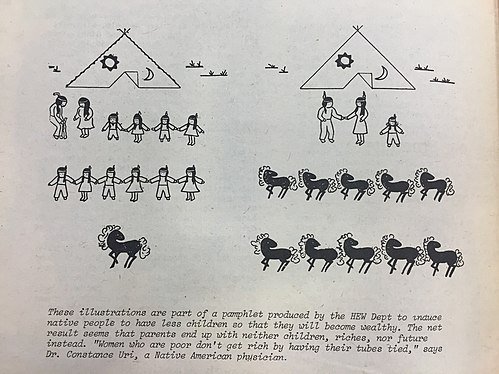 Image of an infographic created by the Department of Health, Education, and Welfare to convince Native American women to be sterilized.

Dr. Connie Pinkerton-Uri (Cherokee/Choctaw) found further evidence supporting that most sterilizations were unjustified by studying the notes on 132 sterilizations done on Native American women in Oklahoma. The doctors classified 100% of the sterilizations as non-therapeutic, meaning they were done with the full purpose of preventing further pregnancy—not to treat medical conditions. 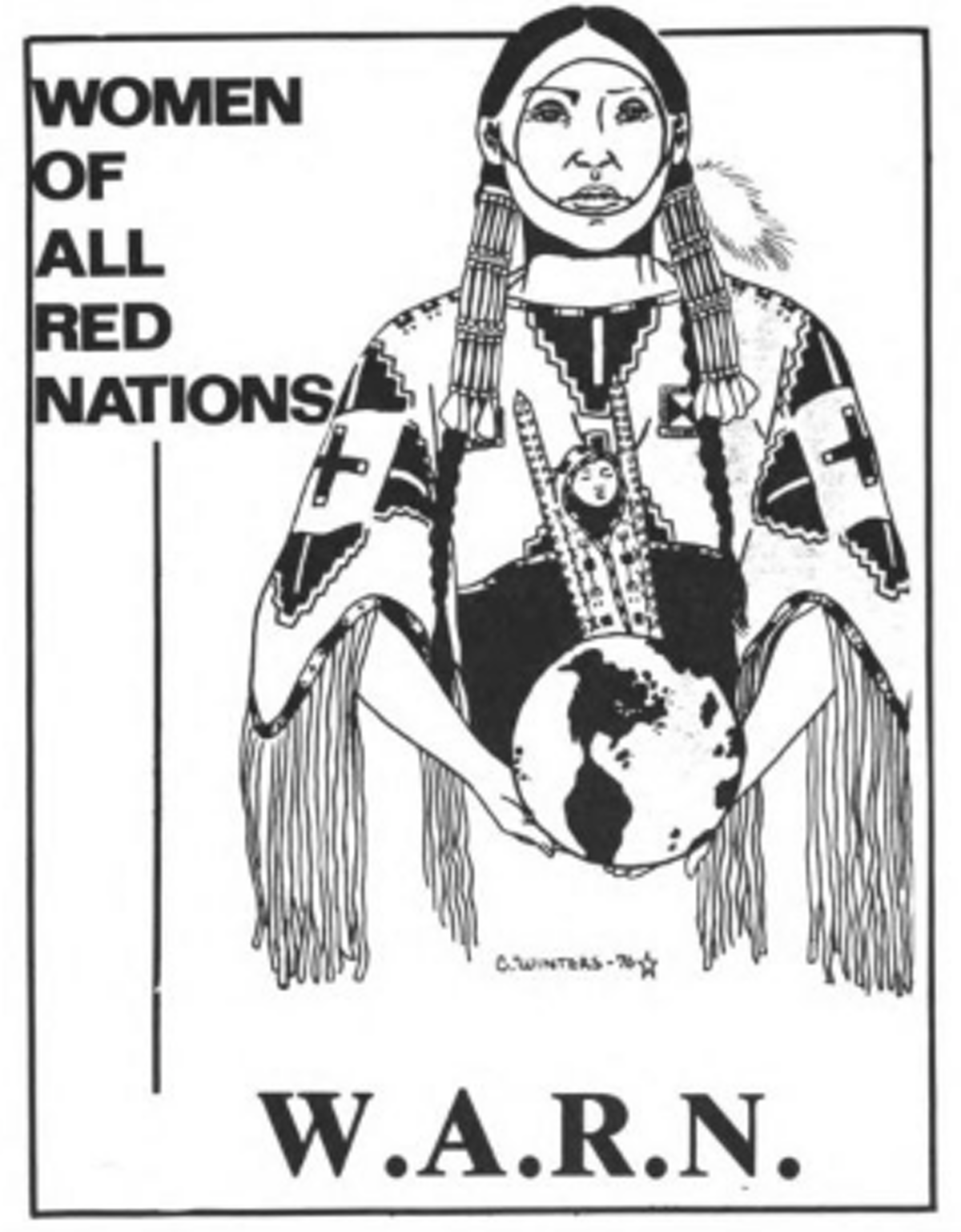 Women of All Red Nations (WARN) was a group that spoke about the forced sterilization of Native American women.

The legal system coupled with clinician paternalism is what allowed for forced sterilizations to occur on a large-scale. President Richard Nixon’s Family Planning Services and Population Research Act of 1970 provided federal funding for sterilization as a family planning service for IHS and Medicaid patients. This gave physicians with paternalistic and racist agendas the means to carry out thousands of unnecessary sterilizations in poor communities and women of color. In five years, sterilization of women had increased 350%[7] with 1 million women sterilized each year.[8]

50 years later, we are still trying to understand the extent and impact of what happened to Native American women during this era in the United States. Native American women lost loved ones, could not carry on tradition, and ended their lives—all because of biases and manipulation in healthcare that resulted in their sterility.

For many Native American women like Jean Whitehorse, having children and taking care of a family are two of the most important roles one can hold in a lifetime[9]. Taking away her ability to reproduce disconnected her from her Navajo traditions and family.

Although an unjust legal system allowed and incentivized sterilizations during the 1970s, it is doctors who enabled the system to be successful in its racist agenda. Today, healthcare professionals must find ways to combat policies and systems that are still inherently racist. One strategy is practicing trauma-informed care as we discussed in one of our recent blogs. We can learn more about the communities we are serving and provide medicine that acknowledges what patients are experiencing both in and out of the healthcare setting. From organizations like  White Coats For Black Lives supporting #BlackLivesMatter to individual efforts like Dr. Connie Pinkerton-Uri who demanded research into forced sterilization of Native American women, clinicians have a responsibility to shed light on injustices in the system, and ultimately aid in the dismantling of racist structures that have a legacy of impacting countless vulnerable communities of color.

[5] The GAO did not interview patients, leaving out pertinent narrative experiences of the process of forced sterilization.