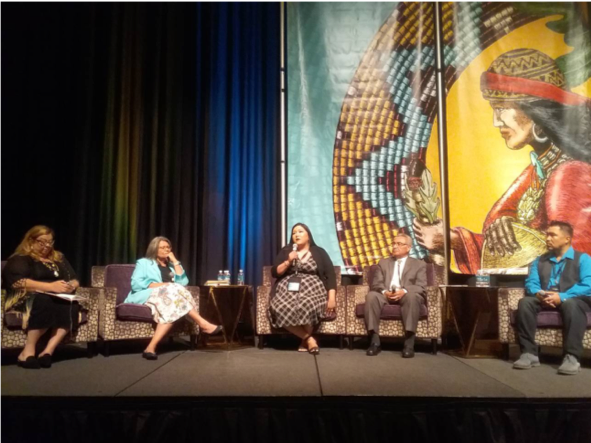 Last week, I was able to attend the National Indian Health Board’s annual National Conference that took place in Temecula, California this year. The theme was:

The National Indian Health Board (NIHB) is a non-profit organization that was established by Tribal governments in 1972 to advocate on behalf of federally recognized American Indian and Alaska Native (AI/AN) tribes. The NIHB seeks to “reinforce Tribal sovereignty, strengthen Tribal health systems, secure resources, and build capacity to achieve the highest level of health and well-being for our People.” Ultimately, the NIHB provides Tribal governments with timely information from multiple levels to ensure that tribes are able to make informed health care policy decisions.

What does “Health=Sovereignty” mean? American Indians and Alaska Natives (AI/AN) have a unique relationship to healthcare in the US because healthcare is a treaty right negotiated between AI/AN and the US government. Read one of our earlier blog posts, “For American Indians, Health is a Human and a Legal Right” , for more detail about this federal trust responsibility.

I found that every topic discussed led right back to what this treaty right means and how we need to find ways to hold the US government accountable to the promise it made to tribes. Although the current health statistics of AI/AN people show deep inequities, the steps the NIHB and tribal governments are taking to combat them shows the resilience of Indigenous communities.

One of my biggest takeaways from the conference stemmed from the discussion during the Department of Veteran Affairs and the Indian Health Service listening session. Here, I found out that although there is significant collaboration happening between the VA and IHS, it is not enough to close the health outcome gaps of AI/AN veterans.

A fact not known by a majority of people in the US is that “American Indians serve in their country’s armed forces in greater numbers per capita than any other ethnic group”[1]. Many AI/AN veterans spoke about the barriers to health care, such as great distances to the closest VA hospital distrust of VA medical staff (preventing them from returning to get necessary treatments)[2].

During the plenary session, a representative from the United Nations shed light on some statistics of Indigenous people globally: 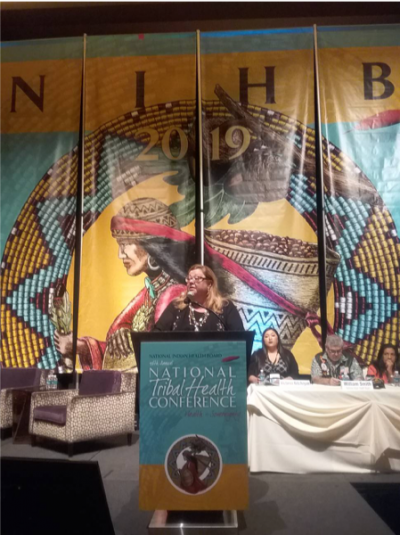 According to the CDC, American Indians have the second-highest death rate related to opioid use and it is continually rising—in 2017, there were 15.7 deaths per 100,00 people. How did this happen?

Stacy Bohken (Sault Sainte Marie Tribe of Chippewa Indians), the CEO of NIHB, had an answer to this question. To summarize her statement:

Despite a country’s political construct—with New Zealand and Canada having publicly funded systems, and the United States having IHS, Medicaid, and private insurance—Indigenous people around the world are suffering from the same illnesses/diseases at almost the same rates… Indigenous health outcomes are a result of the hand of colonialism.

I believe physicians and other health care professionals should use the tools at their disposal to specifically aid Indigenous people around the globe. This means diving into how Adverse Childhood Experiences (ACEs) (see below), PTSD, intergenerational trauma, healthy eating, and preventative care can be tailored specifically to the needs of each Tribal nation and Indigenous community.

On my last day of the conference, I attended a workshop on “Community Engagement, Culturally Congruent Practices, and Strategic Collaborations.” This presentation ended the day on a hopeful note because it was about successful outcomes of engaging youth in their own healing and well-being.

Many of the youth they were working with had either stopped attending or were often suspended from school. Through a participatory approach, community leaders reconnected youth with their traditional songs and dances to help them build self-confidence. This in-turn helped them learn how to navigate the school system and feel more comfortable within it.

Concluding with the importance of engaging youth was perfect because it brought back the importance of “health = sovereignty”. What many NIHB speakers were alluding to was the fact that they are fighting for health equity in order to help AI/AN people now and in the future—and the future lies in the youth.

Walking out of the NIHB conference, I felt hopeful. I witnessed so many leaders who knew their community’s specific needs and were constantly finding ways to improve the existing systems. With them and future leaders, I know that the health outcomes of AI/AN people will improve.