As clinicians, we’ve all treated patients whose physical symptoms are, when enough time and space are allowed for patients to share their stories, ultimately found to be manifestations of historical trauma. We typically link somatic complaints such as abdominal pain or chronic headaches to potentially arising from trauma, but what about chronic diseases such as liver failure or COPD? In the past 25 years, emerging research has shown convincing evidence of what many already knew: childhood trauma is directly associated with significant disease and early mortality in adulthood.

Surgeon General Dr. Nadine Burke-Harris, the first Surgeon General of California, brought Adverse Childhood Experiences (ACEs) to the public eye with her 2014 TEDMED Talk, “How Childhood Trauma Affects Health Across a Lifetime.” First studied in the mid-90s by Kaiser Permanente and the CDC, the term ACEs is used to describe “potentially traumatic events that occur in childhood (0-17 years) such as experiencing violence, abuse, or neglect; witnessing violence in the home; and having a family member attempt or die by suicide.”

Figure from the CDC with a pyramid describing how an increase ACEs can result in early death.

The CDC-Kaiser study determined that as the number of ACEs increases, so does the risk of specific outcomes. According to the Center for Youth Wellness, “exposure to intense, frequent, or sustained stress without the buffering care of a supportive adult, can change children’s brains and bodies, including disrupting learning, behavior, immunity, growth, hormonal systems, immune systems, and even the way DNA is read and transcribed.”

Clinicians must be a part of the solution by providing trauma-informed care and emphasizing the importance of supportive communities. The Center for Youth Wellness also emphasizes on their website that “even under stressful conditions, supportive relationships with caring adults can prevent or mitigate the damaging effects of toxic stress by restoring children’s stress response systems.”[1][2][3][4]Therefore, clinicians must emphasize the value of the family’s role as well as the importance of the self-care of the caregivers themselves. 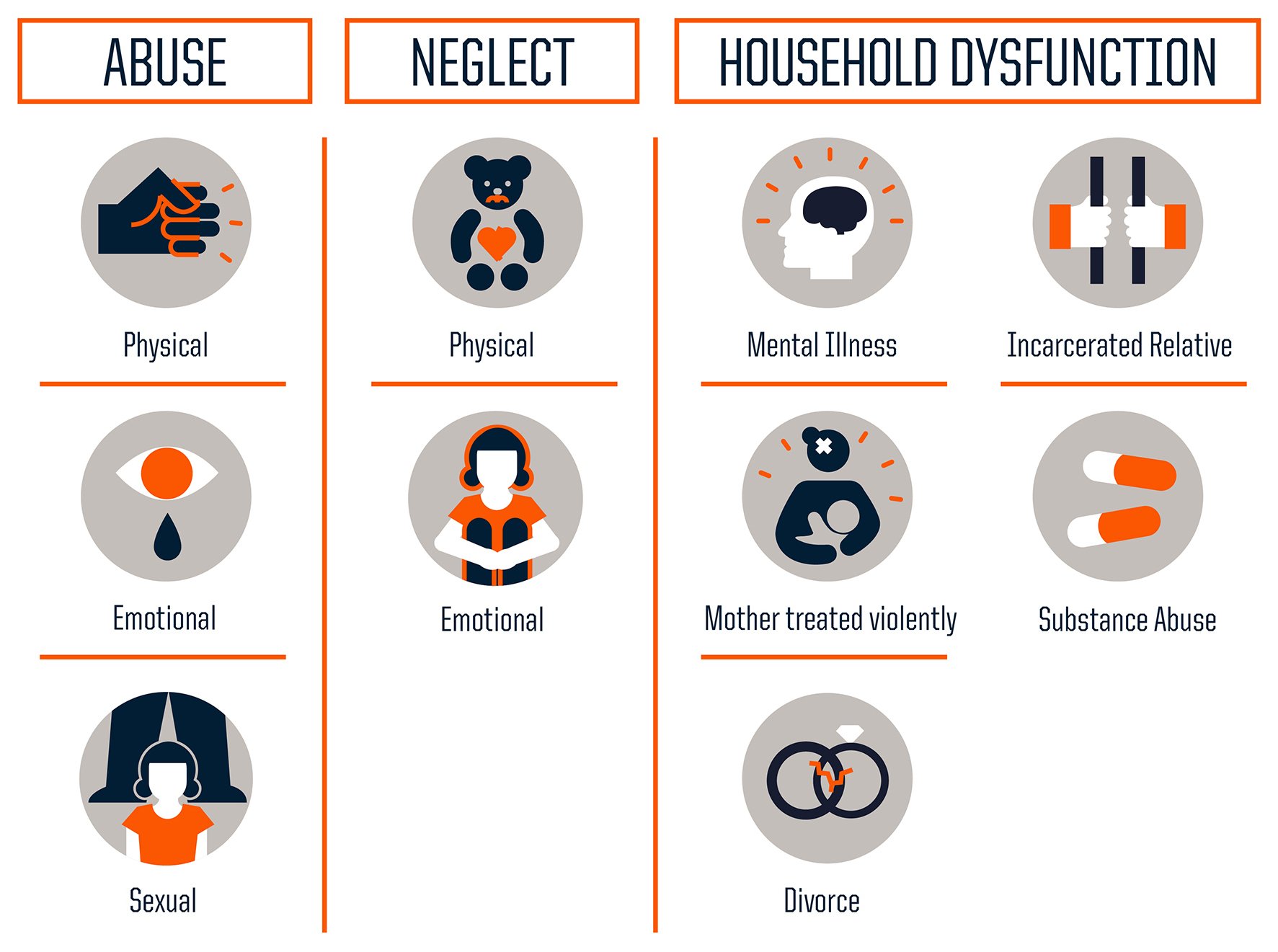 In addition, to provide the best care to many vulnerable communities, providers have to learn about the unique experiences, stories, and histories of their patients. For example, ACEs are prevalent in American Indian/Alaska Native communities, and researchers have studied the consequences of historical and intergenerational trauma from “decades of traumatic losses and forced assimilation.”

In a separate study, Koss and colleagues found that “among seven [anonymous] tribes (N = 1660) … 74-100 % of men and 83-93 % of women were exposed to ACEs, and physical abuse, sexual abuse, and boarding school attendance were strongly associated with alcohol dependence.” They also found that each additional ACE increased “the odds of suicide attempt (37%), poly-substance use (51%), PTSD symptoms (55%), and depression symptoms (57%).” They summarized that “the exploration of these relationships reflects the importance of examining tribal health status partly as a function of collective trauma.” These findings highlight the importance of addressing ACEs that are specific to AI/AN communities.

Educating doctors and other healthcare professionals about the distinct experiences and health outcomes of specific AI/AN communities as well as other underserved communities is vital to providing high-quality equitable healthcare. And, working with caregivers through a trauma-informed lens is a necessary skill for providers. For example, clinicians must gain a deep understanding of the impact of colonialism (including boarding schools, foster care, ethnocide, and genocide) on AI/AN people if they are to provide care to AI/AN patients. As part of clinicians’ ongoing work, they must also learn about the ‘stolen generation’ in AI/AN communities, and the prevalence of intergenerational trauma.

Addressing community-specific Adverse Childhood Experiences leads to better health outcomes. It is imperative, as Surgeon General Dr. Burke-Harris said in a recent talk, that we “don’t just focus on treating the surface symptoms and we invest the time and the resources in figuring out how do we tackle the underlying root cause.”

[1]One study done in 2012, to review interventions between families, couples, and children who have been exposed to violence and high-stress environments, supports this statement.

[2] Harvard University’s Center on the Developing Child claims that a supportive environment can prevent or reverse the toxic stress response damage and is doing more research on ACEs.

[3] The JPB Research Network is finding additional ways to mitigate the effects of toxic stress in children.

[4] NPR article explaining the CDC’s new report about childhood trauma. It outlines how childhood trauma is a public health concern and how mentoring and caring relationships will help buffer the effects of trauma.