Many of us watched the initial COVID-19 vaccine rollout with enormous relief and cautious optimism – for the frontline workers who have risked their lives since March and for a chance to prioritize the most vulnerable in our communities to be some of the first in line.

These scenes, though, are playing out against the backdrop of yet another widening disparity associated with the COVID-19 pandemic – global access to a safe and affordable vaccine.

Since the spring, wealthy countries have been striking direct deals with pharmaceutical companies – deals that are now paying off as shipments of the Moderna and Pfizer vaccines crisscross these countries. In fact, wealthy countries have claimed more than half of the vaccines anticipated to come on the market by the end of 2021 – in some cases, enough to inoculate up to six times their populations.

Meanwhile, low- and middle-income countries are hoping for 20% coverage by the end of 2021. It may even take until 2024 for low-income countries to obtain enough vaccines to inoculate their populations. While the pandemic’s toll on the African continent has been much lower than the U.S. toll, African public health leaders believe the actual number of cases is far greater than those reported. Dr. John Nkengasong, head of the Africa Centers for Disease Control and Prevention, said, “The U.S. is not going to target 20% of its population. Europe is not going to target 20% of its population, … Why do you think in Africa we should?” 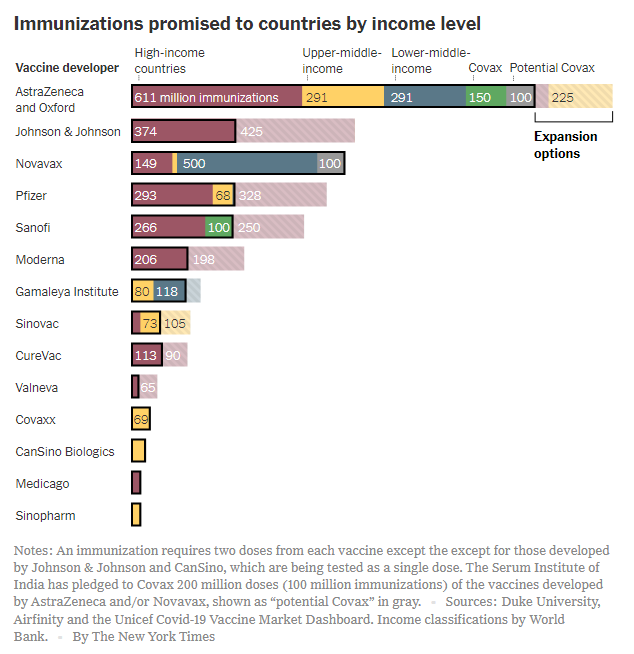 Early in the pandemic, the World Health Organization and Gates Foundation launched the Covax Initiative to ensure equitable vaccine distribution to low-income countries. The initiative is meant to enable poor countries to buy vaccines at affordable prices and has, so far, secured financing commitments from numerous world leaders. It relies, though, on pharmaceutical companies deciding who gets access to the limited number of vaccines they produce based on countries’ ability to pay, rather than human need.

Wealthy countries and vaccine manufacturers can minimize the profit motive behind vaccine distribution in several ways. Countries like the U.S. and Canada can donate excess vaccines or stagger their deliveries with low-income countries. As of December 30, 14 million doses were shipped across the U.S. and only 2 million administered – a good reason to alternate deliveries with other countries so that excess vaccines do not risk expiring.

And, more can be done. The World Trade Organization can waive intellectual property protections, allowing countries such as India and South Africa to make their own affordable versions of the vaccine. Unfortunately, high-income countries – where Big Pharma wields oversize political influence – recently rejected a waiver to IP protections that was proposed by several countries attempting to guarantee access to a vaccine for their citizens.

In the interest of national security (and helping mankind), wealthy countries should temporarily ignore IP protections, and vaccine manufacturers should treat a lifesaving COVID-19 vaccine as a global public good, rather than a profit-maker. Jonas Salk, inventor of the polio vaccine, famously said that “the people” own the patent to his invention: “There is no patent. Could you patent the sun?”

Healthcare providers can also call for more action. We can apply pressure to our elected officials and the leaders of pharmaceutical companies by calling for a #PeoplesVaccine, rather than a profit vaccine. We can demand that manufacturers and governments produce enough doses, share the science associated with vaccines, and allocate more to low-income countries.

Let’s begin the new year avoiding the tragic inequity of previous global health responses, like the AIDS crisis, continuing to support our frontline workers who have been vaccinated, and remembering that in this pandemic, we really are all in this together.